I’ve been trying to lose the weight I put on during the stressful move interstate.  First I increased my exercise mainly with a Fitbit (a great pedometer that puts all your results onto a phone app).  And felt better for it but only lost weight in the first week.  Then I tried tracking my foods with Weight Watchers ( http://www.weightwatchers.com.au/ ) in a way I was familiar with and it worked last time …..but no change in weight!!  Even though at least I felt healthier and was back to eating when hungry!

Luckily I went to a Weight Watchers meeting a couple of weeks ago and got a very small handbook on Simple Start where they advocate just eating healthy & filling foods for all you meals, as much as you need to feel satisfied with high fibre & high protein to fill you up – and only have 1-2 small treats for the whole day and so far so good it seems to be working!

I think the other reason I’m able to limit the sweet comfort treats is a strategy I have been practising from the Weight Escape book, (http://www.theweightescape.com/ ) linked to the Act Mindfully movement ( http://www.actmindfully.com.au/ ) for the last 2 months.  SLOWLY I have been learning to mindfully observe & investigate the cravings….   Even though it seems obvious now, I hadn’t actually linked my daily mindfulness practice to my attempt to eat healthier foods…..and things started to feel better when I combined the two.

So first I resolved to eat mindfully every meal, at least for a moment was the goal (see earlier blog) – but then Much Much Harder was to pause and actually pay attention to the CRAVING wave that happens around certain foods.  To really investigate how strong is the craving, how long can you resist it for, if you give into it how much do you give into it, how does it feel when you do? Immediately afterwards and 30 minutes afterwards?

I was shocked at how hard it was to feel the craving and not give into it!   We really seem to be biologically conditioned to eat high energy dense food and to eat too much of it when it is there!  There was a part of my brain that really felt like the world would end if I didn’t get that sugary treat or go back for seconds….and immediately after giving into it there was the sweet relief of NOT having to fight the craving anymore….but  then I noticed that 20 mins afterwards I felt sleepy, lethargic, didn’t feel so energised and wanted another sweet treat to get going again!   So initially it was a devastating process to realise how easily I gave into my cravings…I felt very weak-willed and a couple of times was very nearly about to give up!  By my determination to be healthy now and into the future kept me going and as others say….you have to know what you are NOT doing….to learn to do it differently… I guess that’s really what mindfulness practice is all about….observe deeply what happens, then deep learning and deep change can happen?

After 2 months persistence I am still feeling the craving…but my brain is learning that giving in doesn’t necessarily make me feel better….it’s getting easier to ride the wave and come out the other side without having given in….or at least NOT give in enough to lose a bit of weight!  The weight escape book is reassuring in saying we’ll always experience the craving….and we’ll often give into it….but we can learn enough mindful self control to be healthy….so here’s hoping I can keep riding the craving wave!

Photos of our Events: 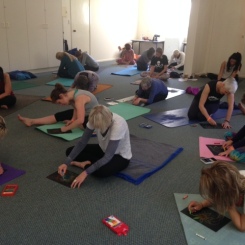 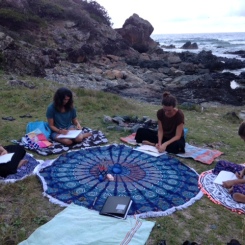 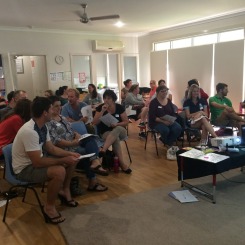 Emotions and Flipping the Lid

What I love about coaching…